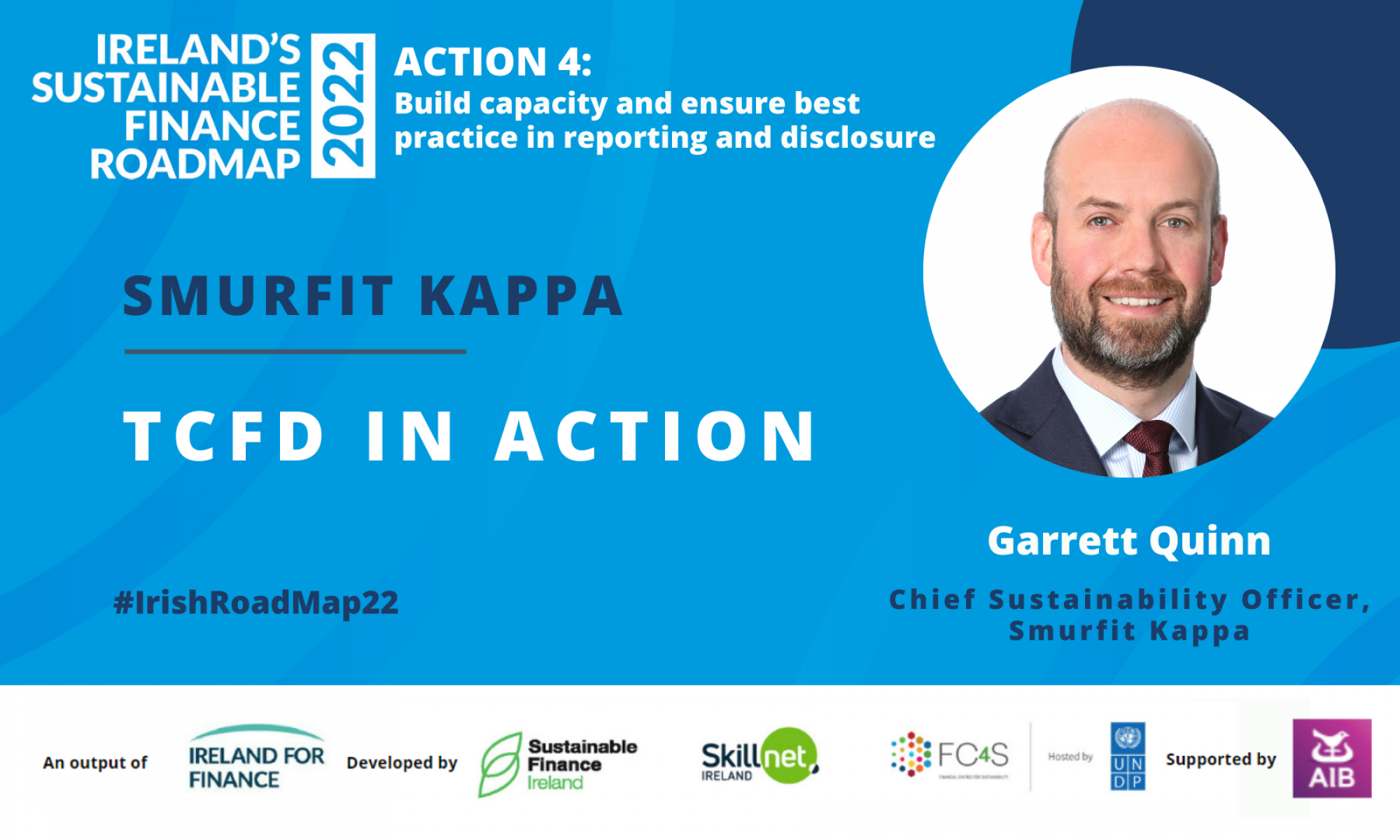 Chief Sustainability Officer with Smurfit Kappa, Garrett Quinn, opens up on how packaging giant’s ‘inherently sustainable product’ and in-depth disclosures of climate data are paving the way for future success

As one of the world’s leading providers of paper-based packaging solutions, operating across 36 countries with around 48,000 employees on 350 sites generating revenues of €10.1 billion in 2021, the importance of sustainability is not lost on Smurfit Kappa – much less on the company’s CSO, Garrett Quinn.

Garrett has spent his entire professional career with Smurfit Kappa, beginning as a graduate trainee and rising to Head of Investor Relations via stints in parts as far-flung as Argentina, France, and then closer to home in the UK and finally Dublin. He took on his latest role in July 2021 and admits that his previous experience has been beneficial.

“The biggest benefit was my exposure to customers and the fact that I had to talk to multiple departments and build relationships in each one,” he says. “I’ve also been around long enough to see the evolution in how customers and investors are responding to the issues of climate change, sustainability and biodiversity.”

“The sustainability piece is newish in terms of the business landscape but it isn’t new to us. Our product is inherently sustainable. It is made from natural fibres, and is completely biodegradable. We’ve been doing sustainability reporting for 15 years and those reports have been independently assured by KPMG for a decade.”

Garrett believes the intense focus on sustainability among investors is a relatively recent phenomenon, and attributes the sea change in attitudes to the stirring work of the beloved conservationist, activist and TV producer, David Attenborough.

“The big turning point from my point of view came in 2017 with the release of Blue Planet, the nature documentary series. For the first time people saw vividly illustrated how life is being impacted by plastic pollution. Following that, major organisations like Sky News began organising campaigns and it became very much part of the consumer zeitgeist,” he says, adding that the 2019 passing of the Single Use Plastics Directive by European legislators politically underscored the social shift.

“People saw Smurfit Kappa as potential winners from the plastic crackdown as our product is paper-based and made from recycled materials. Other companies made big pledges around plastic packaging removal, but their production facilities were configured specifically for plastic packaging. The operations directors at customer sites pushed for delays due to the impact of machinery change on the factory floor, and those changes were further delayed by Covid. Everyone expected overnight success but there are practical concerns.”

“When customers came to us they saw that our product could help them reduce their carbon footprint, and remove any perception of unsustainable packaging causing pollution. That remains our strength.”

A shift in investor demands

A radical shift in investor demands encouraged Smurfit Kappa to take further steps to make its operations even more sustainable. In 2020, the firm announced its support for the Task Force for Climate-related Disclosures (TCFD), an international scheme established in 2015 to help investors understand their exposure to climate risk.

While Garrett admits that the company’s 2021 TCFD offering was light on detail, he promises that its disclosures this coming year will be “chalk and cheese” to what came before.

“In the last couple years, investors have become so much more sophisticated. They are asking much more considered and educated questions about our climate and sustainability plans, and TCFD provided the right framework for both improving ourselves and answering those questions,” he says.

“We did a huge amount of work in the second half of 2021 in terms of readying our TCFD disclosures. There is a section on climate scenario analysis – which offers an assessment of how different climate scenarios will impact the business. That’s a big thing for us and is driven by our committed team and a highly engaged Board. The CEO and CFO live and breathe sustainability. Belief is embedded in the company.”

“The challenge is to make sure this is understood all across the business – in all departments. At the end of the day, finance and risk need to be familiar with it because, from a risk perspective, you probably don’t want to invest tens of millions into an asset if it’s going to be flooded by 2050.”

Developing the TCFD knowledge base

“Working with Sustainable Finance Ireland on the recent TCFD campaign has been very beneficial,” he said. “In particular, the UNEP TCFD training was engaging and supportive of Smurfit Kappa’s significantly increased TCFD reporting this year, and has increased the skills of the team.”

In October 2021, the UK announced its plan to enshrine in law mandatory climate disclosures for UK-registered companies, including banks and insurers, as well as private companies with over 500 employees and £500 million in turnover. Garrett believes it won’t be long before other countries follow suit.

“It’s only a matter of time and TCFD will grow and grow. On the back of that, we hope we are seen as doing a good job. Equally, we are challenging ourselves to do more in the coming years,” he says.

“That’s the great thing about TCFD. It’s not about having the perfect answer on day one, it’s about evolution. The key message for companies is they should simply start making their disclosures. The focus should be on evolving your disclosures over time and so should not be something to be worried about.”